In St Mary Islington Masonic Lodge, we are very fortunate to have members with a wide mixture of ages, professions and nationalities that come from around the globe

Although we are named St Mary Islington Masonic Lodge it does not mean our members are solely residents of London. Some of them travel from as far as the Midlands, the West Country and Scotland. Originally joining the Lodge here in London, work commitments have taken them around the United Kingdom. On an European basis, we also have members residing in both Spain and Portugal

It was necessary for members to meet and plan for the consecration quite some time before the St Mary Islington Masonic Lodge in London was formed.

Recorded history shows that the founders of the proposed lodge met at at
the Golden Fleece Public House, Queen Street, Cheapside on the 4th July 1933 to discuss plans for the consecration. 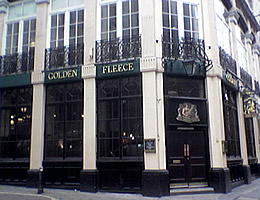 The foundations of St Mary Islington Masonic Lodge in London.

A number of other planning meetings were held at the Golden Fleece Public House to decide the name of the lodge (Originally Islington Manor), fees for members and which Freemasons would hold the regular offices of the lodge.

Before the Lodge was brought into existence in 1934, the Lodge Bye-Laws had first to be decided upon. This would set down, amongst other things, such as when the Lodge would meet, (then a Friday) and where it would meet (Freemasons Hall). It was agreed that the Founders fee for joining the Masonic Lodge in London would be 10 guineas (£10 and 50pence). This covered the first year’s subscription and a ‘Founders Jewel’. And that each appointed Officer provides the collar of his office. It was also agreed that the number of Founders be limited to 20 brethren. The day of the meeting had been decided as the 2nd Friday in the month. This would be for October, November, January, February and March. Because of the disruption of WW2 and other mitigating factors, this was later changed to a Thursday.
The subscription to be 5 guineas (£5 and 25 pence) yearly, that the invitation fee be 15 guineas (£15 and 75 pence), the joining fee 8 guineas (£8 and 40 pence) and that the Brethren meet in black dinner Jacket & black tie. As a sign of the times and as a practical solution, this was later changed to dark suits. This catered for those members coming straight from work.

During both the First and Second World Wars Brethren from our Masonic Lodge in London served in the armed forces, air force, Home Guard and other essential services. In the Second World War a number of Brethren again joined the forces, Home Guard, fire service and other essential services. The exception being two brethren of ill health. (Those of ill health had served their country during the First World War).

The lodge itself carried on as far as possible but with restrictions in place lodge members could not dine together and it was necessary to alter or cancel meeting dates all together.

To our knowledge and records no Brother was killed during the war years but in the post war years it is recorded in the lodge history in March 1947 it sadly announced the death of Bro. Graham Colways who was killed on Active Service with the Royal Air Force.

St Mary Islington Lodge in London has welcomed a great number of distinguished Masonic guests to the lodge. Not only from London, around the UK but notably from Norway and Denmark, Ireland and Turkey, hence the name ‘Hospitality Lodge’ that we are affectionately know as.

Today we remain a friendly welcoming lodge with members from all walks of life who enjoy companionship both in the lodge and meeting socially outside of lodge activities.

To continue our with our traditions and long established history we welcome enquiries about joining Freemasonry in London.